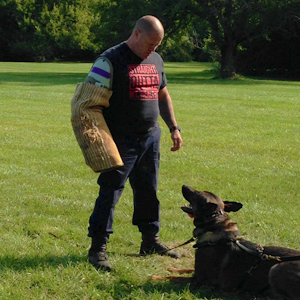 Don enlisted in the United States Marine Corps as a Military Policeman after graduating High School with the goal of eventually becoming a Law Enforcement K9 handler.  After being honorably discharged from the Marine Corps, Don became a Police Officer in the Cincinnati Police Department. In Cincinnati, as in any Police Department, K9 in a highly sought after and coveted position. It took him ten years but he was eventually selected to attend the K9 basic course after a very competitive selection process.

In 2011, Don attended an extensive Trainers’ Course at one of the nation’s largest and most respected Police and Military Working dog kennels to complete his Trainer Certification. Since then, Don has had the privilege of training hundreds of Police K9 teams all over the United States.

Training and selecting Police dogs has taken Don as far away as Slovakia in Eastern Europe. It would not be an exaggeration to say that dogs play a central role in his life. Don is currently a lead trainer with the department and is working with his third K-9 partner, a German Shepherd/Belgian Malinois mix named Pedro.