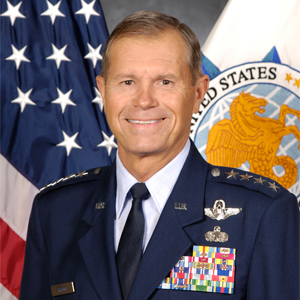 During 40 years of service, he held a variety of demanding command and staff positions.  He has led large-scale, diverse, global organizations where he earned a reputation as a motivational leader, strategic thinker and change agent who delivered solutions to the most complex challenges.

As Commander, United States Transportation Command—a Unified, Combatant Command—he answered directly to the President of the United States and Secretary of Defense and served as the single manager responsible for global air, land, and maritime transport for the Department of Defense.  He led the most comprehensive and collaborative strategic planning effort in the command’s 25 year history.  His diplomatic skill fostered new international partnerships and strengthened others enhancing the nation’s unparalleled ability to rapidly project influence, anywhere at anytime.  He led over 130,000 personnel and annually executed over $12 billion of business.

As Commander, Air Combat Command, the largest major command in the Air Force, he was responsible for organizing, training, equipping and maintaining combat ready forces while ensuring strategic air defense forces were ready to meet the challenges of peacetime air sovereignty and wartime defense.  The command consisted of over 130,000 personnel who operated over 2000 aircraft at more than 300 locations worldwide.

As Vice Chief of Staff of the Air Force, he presided over the Air Staff and served as a member of the Joint Chiefs of Staff Requirements Oversight Council and Deputy Advisory Working Group. He led the organization, training and equipping of over 690,000 people serving in the United States Air Force and provided oversight of a $120 billion annual budget.

As Assistant to the Chairman of the Joint Chiefs, he represented the Chairman or Vice Chairman in the White House, traveled internationally as an advisor to the Secretary of State and served as the Middle East Peace Process Roadmap Monitor.  During his tenure he streamlined the coordination process and increased collaboration between the Department of Defense and Department of State to obtain time-sensitive policy decisions and to meet US strategic objectives.

He is currently serving on the Texas A&M University (TAMU) President’s Board of Visitors, TAMU Galveston Board of Visitors, TAMU Corps of Cadets Association Board of Directors, and TAMU Association of Former Students Leadership Council.  He is also the Chairman of the Board for the Military Child Education Coalition (MCEC), an Outside Director for CEVA Government Services, an advisor for aVolt Incorporated, Knight Aerospace Medical Systems, Kinetic Performance Dog Food, a member of the Gordian Institute, a Senior Fellow for National Defense University, a consultant for Northrop Grumman, and a Strategic Advisor for the Sierra Nevada Corporation.